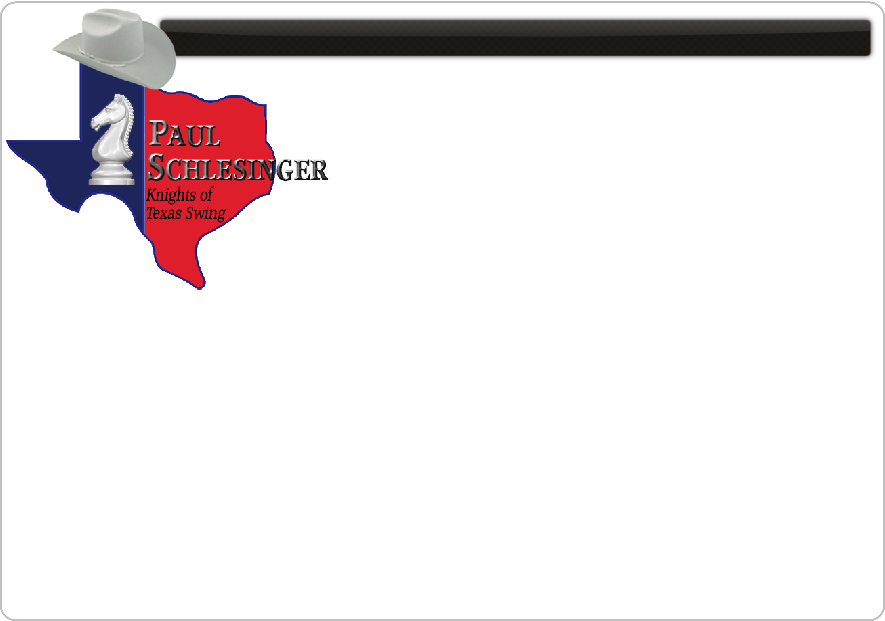 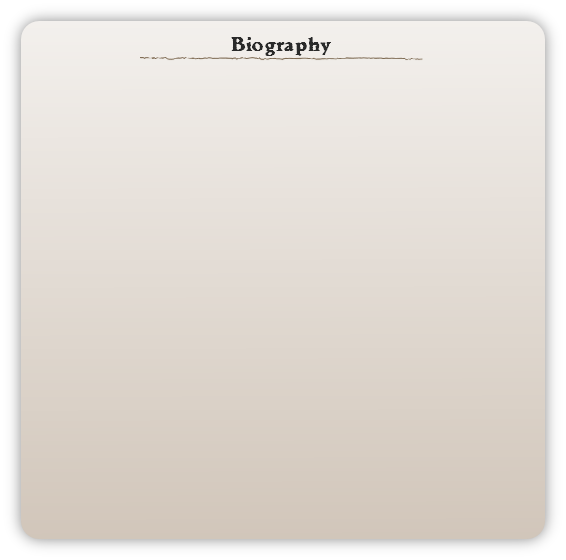 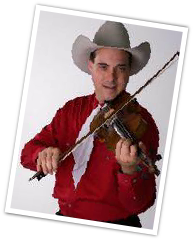 I am a fiddle player and vocalist from Taylor TX, where I grew up. My style of music is a blending of Texas swing and honky tonk, molded by the unique playing styles of the professional post-war musicians who grew out of Central Texas.

Born September 10, 1970, I studied piano as a child and later played the euphonium in the Taylor high school band. I have always enjoyed “older” music, no doubt thanks to my parents’ record collection. My high school contemporaries listened to the latest heavy metal or George Strait music; I listened to the Sons of the Pioneers. While earning my photojournalism degree at the University of Texas at Austin in the early 1990s, I became immersed in the world of traditional western swing and Texas honky-tonk music, a source of my photo documentary projects.

My inspiration to perform comes from my appreciation of Jimmy Heap and the Melody Masters, a Taylor band that operated from 1946-77 and achieved national fame. In 1992 I befriended Perk Williams, the fiddler and vocalist for Jimmy Heap from 1949-57, and who performed on their 1954 Top 5 hit recording of Release Me. Though dying of cancer, Perk gave me my first fiddle instructions in 1993, teaching me Faded Love as first of six tunes.

The same year, I met fiddler/pianist Arlie Carter and rhythm guitarist/bassist Bill Dowdy, both who became my close friends and musical mentors. Both were regularly playing at a senior citizen’s jam session in the nearby town of Lexington. Arlie was a Melody Master from 1946-55, and co-authored many of their songs, including the recognized country standard, Wild Side of Life. Arlie passed away in 1996; a year later I obtained his Peavey Vegas 400 amp and his favorite fiddle, a 150+ year-old, German-made Strad copy that he coincidentally played on a 78 rpm record with Bill Dowdy in 1950.

Now armed with professional tools of the trade, I joined Bill Dowdy at the Lexington Senior Citizens Center weekly jam session in October 1997. Bill guided me into the performing world by taking me to gigs, introducing me to fellow musicians, and teaching me rhythm guitar. We formed a musical pair that continues to this day. My first paid job — $100 — came in 1998 when Bill and the Jim Siegeler Orchestra of Giddings played a dance in San Angelo. In addition to joining Siegeler’s group, I played several jobs on the church festival circuit with Alvin Minarcik of LaGrange. During this time period I had the opportunity to work with noted country-polka musicians Vernon Drozd and Gil Baca.

In these formative years I also learned a lot from the mutli-talented Bill Dessens and the late western swing icon Clyde Brewer. Both were fiddlers and members of the River Road Boys, a highly respected Houston western swing band. Brewer bestowed the most valuable piece of advice in the Art of Twin Fiddles: “Play the fiddle melody as you would sing the words.” This simple statement became one of the foundations of my playing style, allowing me to play twins with most every professionally trained player I have encountered.

In 2000, at the invitation of bandleader/bassist Joe Chovanec, I began working with the King of Swing, a regionally successful dance band that started in the early 1980s. I was hired to play twin fiddles with Ray Tesmer, a well-respected fiddler/guitarist from Round Rock. Though the group faded by 2003, Ray and I formed a tight musical partnership that continues today. Another former Melody Master, drummer George Harrison, was a regular with the King of Swing as well as Siegeler’s Orchestra. He also became a valuable asset to my future music groups.

In 2001 I joined the Texas Pioneers, a country swing band featuring both younger and veteran players. One of its early members, swing jazz fiddler Tony Sepolio, became another mentor. Other members include legendary steel guitarist Jimmy Grabowske, Bill Dowdy, bassist Thomas Durnin and drummer Dave Bedrich. The Pioneers became the host band for the annual Jimmy Heap tributes from 2002 to 2009. We also did a couple of tributes to the late Texas music legend Adolph Hofner and late Cajun fiddler Harry Choates. Other highlights include performing at the 22nd Annual Legends of Western Swing show and dance at the Texas Hall of Fame in Bryan, and opening for a 2006 Asleep at the Wheel show in Manor. Durnin and Bedrich also manage the Czech Melody Masters, and I have been able to sit in with that group on several occasions over the years.

Also in 2002, a part of my music career came full circle when I was asked to perform at the 2nd annual Perk Williams Tribute in Chriesman, TX. My first live radio and televised music performances came as a result of promoting the Perk tributes, thanks to KRXT radio in Rockdale, and the local cable TV station in nearby Caldwell. Our “Perk Williams tribute band” has been performing the last Saturday in October every year since, where we showcase my repertoire of Perk Williams and Jimmy Heap songs.

In this period I also became the staff fiddler for the Thorndale VFW Jamboree, a position I still hold today. I also worked as the staff fiddler from 2003-2007 for A.T. Shuffield’s monthly Star of Texas Jamboree at the VFW in Cameron. From 2003-2008 I concurrently played with Joe Boyd Reynolds of Lexington, who led the Lee County Cowboys, a hardcore traditional honky-tonk and rock ’n’ roll dance band, playing the area’s grubbier nightspots.

In 2004 Ray Tesmer and Roger Beck invited me to join their 29th Street Band, a traditional country swing group that plays twice a week for the Austin senior dance club center at 29th & Lamar streets. I also joined the Stardusters, another country dance band with renowned Austin vocalist Jody Meredith, one of the original Geezinslaw Brothers. Many of these different groups played on specific nights and shared some of the same musicians, so it was possible to play in all of them without too much conflict. I continue to be active with both the Stardusters and the 29th Street Band, playing regular weeknight dances.

I made my first commercially released recordings as a fiddle player in 2004, appearing on several tracks for Joe Boyd Reynolds’ CD, “Ol’ Cowboy.” I also appeared on “More Very Eclectic Country Folk” by Gable Matcek of Caldwell. Both CDs were sold nationally.

In 2005 I released my own first nationally distributed CD, “Our Way,” featuring fiddle and guitar instrumentals with Bill Dowdy. It sold out of its initial pressing of 500 copies within 18 months. Bill and I stepped up our duo performances, appearing in several area restaurants, live radio programs, oprys, churches, parades, and host of other venues. This helped increase our exposure after the Lexington Senior Citizens Center band dissolved in early 2006.

I began using the “Knights of Texas Swing” as the name for my personal band bookings in 2006. My sidemen vary depending on the venue. Ray Tesmer (guitar), Jimmy Grabowske (steel), Bill Dowdy (rhythm), Kim Cochran Jr (bass), and Sherman Lindsay (drums) have most frequently served as Knights. Roy Carroll (steel), JC George (bass), Jim Bowles (drums), Roger Beck (rhythm), Greg Rickard (piano) and John Beuhler (bass) have also served on numerous occasions. Though a dance band, the Knights concentrate on show venues such as restaurants, concerts, festivals, and other special functions. Some of our highlights have been performing at Subaru of America’s annual convention in Houston, and holding a 6-year residency at Artz Rib House in Austin. We also serve as music ambassadors for a Danish student Texas-immersion program hosted through Austin Community College.

In fall 2007, while the Knights performed at the Walburg Restaurant and Biergarten, its owner, yodeler/accordionist Ronny Tippelt, invited me to join his Walburg Boys, a group specializing in classic standards and German Alpine music. Tippelt hoped to infuse my musical style with his group, broadening their appeal. As a Walburg Boy I played Fridays and Saturdays at the restaurant and performed at many Oktoberfests in Texas and Oklahoma. Highlights were annual televised spots performing German Christmas carols on Austin’s Time Warner station, and live performances on several of Oklahoma City’s major radio stations. I departed the group in early 2010 when their personnel changed and the focus turned towards current music and hard rock.

Within a couple of weeks I found a new home with Glen Collins and his Honky Tonkin’ Buddies, who are disciples of pure traditional, Texas dancehall country music. Glen is an Austin singer/songwriter in the “old school” style, and is also the grandson of the late Cotton Collins, who is credited for the Westphalia Waltz. Other band members are Roy Carroll (steel); Jim Bowles (drums), and JC George (bass). Ray Tesmer (lead guitar) often augments the group. We have grown to be very popular in the traditional dance hall circuit, playing every weekend at traditional venues between Austin and San Antonio where folks still enjoy real country music.

Also in 2010 I began working regularly as a band member with the Milam County Cowboy Church band in Rockdale, and also the Lee County Cowboy Church in Giddings with my old friend Joe Boyd Reynolds. Nearly every Sunday will find me at one church or the other, performing “old school” gospel and spirituals. On occasion I will join with Lee Co. Cowboy Church band mates Curtis Krause (bass) and his daughter Kimberlyn (guitar/vocal) at other church venues or local street festivals, performing traditional country music.

In 2011 I became a regular member of the Comal Country Music Show’s house band, which is a monthly opry held at the Knights of Columbus hall in New Braunfels.

I began experimenting with assembling another group, Straight Up Country, in 2012. Whereas the focus is still old school country, the song selection tends to be not-quite-as-old as the material I perform as a Knight of Texas Swing. The band members are also slightly younger, and so we can play some more uptempo songs and the occasional classic rock ‘n roll number to keep the Baby Boomers happy. Glenn Schneider (bass), Roy Carroll (steel), and either Jim Bowles (drums) or Chip Dunsmoor (drums) often help me out with this effort.

With any luck, my second CD will be out by the end of the year. Entitled “Paul Schlesinger and his Knights of Texas Swing,” the songs include many of my favorite Jimmy Heap numbers and other tunes that I feature at dances and shows. Most all of the musicians on the CD are people who have played with me for many years – Ray Tesmer, Bill Dowdy, George Harrison, Jimmy Grabowske, et al. – and a and a few special guests – Jimmy Heap Jr., Clyde Brewer, and Bill Dessens. The songs are all arranged by me, and feature a lot of twin fiddles. Also included is a never-before-released Jimmy Heap tune, Say Y Me Tib, which was only played at their dances.

This coming November, I will join Roy Carroll and Bill Dowdy to be inducted into the Country Music Hall of Fame in Gatesville, TX. The promoter of the show, Roger Vierse, caught one of our Thorndale Opry performances and decided that we deserved to be recognized at the “professional level.” Both Roy and Bill made a living in the music industry for decades with commercial recordings, so there is no question of their credentials. However, I’m not going to debate my stature, and happily accept the award – it may be the only one I ever get! The award show will be held at the City Auditorium, 110 N. 8th St., Gatesville, TX at 7 PM.